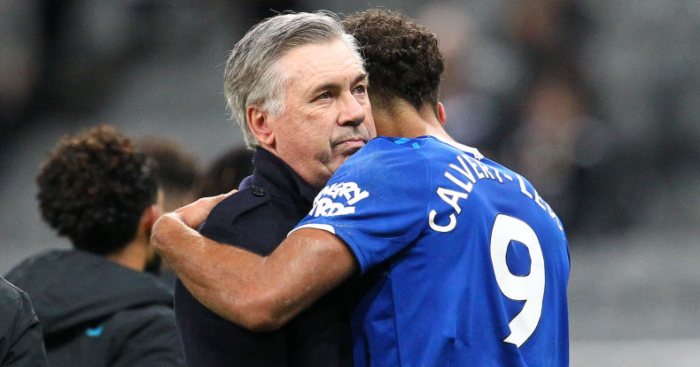 Dominic Calvert-Lewin says the “cool” approach Carlo Ancelotti has at Everton has helped him to become a top-class goalscorer.

Calvert-Lewin also marked his England debut against Wales on Tuesday with the opening goal, heading in Jack Grealish’s cross to set up a 3-0 victory at Wembley.

The arrival of the Italian has truly brought Calvert-Lewin to life, though. Since Ancelotti took charge on December 22 last year, only Pierre-Emerick Aubameyang (18) has scored more goals in the Premier League than the Everton forward.

Yet Calvert-Lewin says there is nothing specific about Ancelotti’s tactics that have helped him thrive, insisting it is mostly about confidence.

“He’s not given me anything massive to think about but his whole persona – how cool, calm and collected he is – means he’s a man I enjoy playing for,” Calvert-Lewin told Sky Sports.

“He’s a good guy, first and foremost, I think that’s very important. He filled me with confidence straight away. For a manager who has achieved what he has and worked with some great players, that gave me a massive boost.

“In the system he is playing at Everton it has allowed me to be more focused on being the focal point for the team and doing my job, which is scoring goals.”

Calvert-Lewin is now battling for a starting spot on Sunday when England face Belgium in the Nations League.

“I enjoyed the occasion against Wales and if I’m called upon I’ll be ready,” he said. “There’s a massive amount of quality within the team. If you look at the players who aren’t classed as the starting XI, they are big figures for their club teams so there’s competition for places within the team.

“It’s a very proud moment to represent your country and we all want to play. That competitiveness brings more quality out of the players. I need to stay consistent, I don’t look too far ahead but just affect what I can affect. To be ready in the right place at the right time to put the ball in the back of the net.”