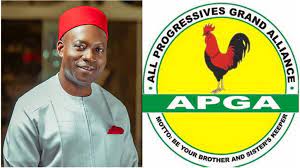 
The Chairman of the All Progressives Grand Alliance (APGA), has asked the Independent National Electoral Commission to immediately publish the name of it’s candidate, Charles Soludo, citing section 31 subsection 3 of the Electoral Act.

APGA chairman, Victor Oye reacting to the names of candidates published by INEC, and the name of it’s candidate Charles Soludo was not cleared by the electoral umpire.

The party insists that failure of INEC, to publish the details of the name of it’s candidate for the Anambra governorship election, is a ploy to allow the commission comply with a Jigawa State high Court judgment which the party has appealed against.

Mr Oye, alleged that INEC failed to publish the name of their candidate since 9th of July, after duly Acknowledging receipt of the details of the party’s candidate sent to the commission on 2nd of July 2021.