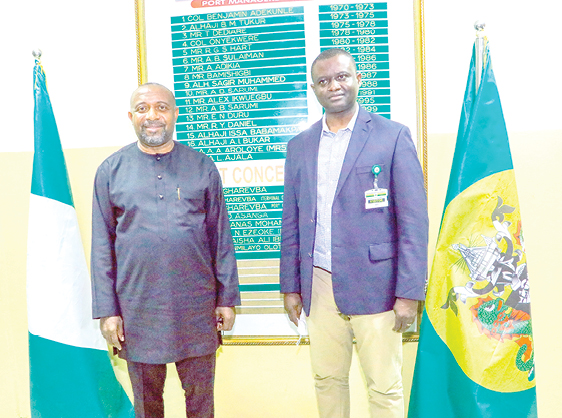 The Federal Ministry of Transportation intervention at the Maritime Academy of Nigeria in 2017 has led to an improved learning environment, with the school management saying the upgrade came albeit a blockage of revenue leakages. Almost four years after, vested interests, who have benefited from the Academy’s revenue leakages for decades seem to be fighting back, writes TOLA ADENUBI. Excerpts

When the current management of the Maritime Academy of Nigeria led by Commodore Duja Effedua took over the reins of the administration of the Academy in 2017, the mandate was clear; to rebuild an institution that was almost on the verge of being delisted from the White List of the International Maritime Organisation (IMO). Fast forward to three years and eight months after, the school has witnessed a transformation in infrastructure upgrade, improved curricular activities and a conducive learning environment. The acquisition of four state-of-the-art simulators, namely the Full Mission Bridge Simulator, the Full Mission Engine Room Simulator, the Multifunctional Classroom and the Ocular vision simulator raised eyebrows amongst maritime stakeholders who wondered where the Academy got such monies from given the fact that previous administration of the school had always lamented paucity of funds.

In a recent press briefing in Lagos, the Rector, Duja Effedua revealed that monies used to buy such equipment for the school had come mainly from blockage of revenue leakages. According to the Rector, “What past management of the school could not achieve in 39 years, I have achieved in three years. Why did I achieve those things? Because I said no to money sharing, I blocked leakages. In one year and six months, I was able to save N1.8 billion. Because I stopped money sharing, now I have become the enemy.”

The rector also revealed that because he said ‘no’ to money sharing, those with vested interest who have plundered the Academy for years want him dead. In his words, “The worst problem I had when I resumed in 2017 was picketing of the Academy by vested elements in the host community. When I resumed, a coffin was placed at the main gate of the Academy, and I was told that if I entered the school, I would die. The most annoying part was that they buried a life cow, that if I entered, I must die. It got to a point they sent me a text, that if I didn’t corporate with them I will die. This is the third year now plus seven months, I’m still alive. So a lot of things are going on. The academy has evolved. We have achieved all we set out to achieve or I will say I have achieved because I had a goal. All the projects that they abandoned and they were paid for, we had to remodel most of them and complete all of them.

“We have also initiated new projects. We have the Nautical Building which was totally abandoned and it was paid for, over 19 years. We are dealing with a lot of abandoned projects, with contractors insisting that we pay them for jobs that are poorly executed.

“The most annoying part is that nine months ago, when Nigerians were battling with COVID-19, they met in the house of a senator in that state and discussed the problems I am posing for them. That I needed to be taken care of, and somebody was paid N200,000 for that assignment.  But the person became a little bit greedy and decided to send me a WhatsApp chat, saying that if I didn’t pay him N2,000,000, he was going to scandalise me.

“By the time the police tracked this person, it turned out to be somebody I knew too well. He is currently facing charges at the Federal High Court in Calabar. I don’t want to talk much about that because the matter is already before a court.”

For most of the vested interest trying to gain access into the academy’s treasury, internal connivance of workers inside the school has been relied on over the years. Continuing in his address, the rector explained that, “The issue is that they want access to the account of the academy. What the cabal has done over the years is that they forced past rectors to employ people from the host community whether they were qualified or not. Once they were employed, they would send them to strategic departments like bursary, procurement, and Audit. The job of this new employee’s is to protect the criminal empire of their godfathers.

“Lately, you must have been reading some things about money laundering and one of our former workers. The first day I reported for work, the retired bursar came and met me and said, “Sir I will soon be retiring but there is somebody you need to remove from the bursary.”  I said why? He said due to the person’s financial instability, some vested interests in the host community found him very useful in maligning past leadership of the academy and extorting money from them. That whenever he gave them any document after being paid, they would twist the meaning of the document and make it look like something fraudulent. That because the former Rectors soiled their hands, they became vulnerable to these vested interests.

“Now, I was warned about this person, but I felt I was just coming in.  How can you remove somebody like that because another person said something bad about him? So I said I wanted to see the individual and they brought him before me.  When he came, I said to him, is it true you are a blackmailer? Because your colleagues said you extort money from them with blackmail. I read the Public Service Rules to him and asked him if he was a blackmailer. He denied. Honestly I believed him and I thought maybe I needed someone like him to disturb people. But 48 hours later, the same man sent me a text that he would like to work with me. I said he must be crazy, that if he ever sent a text to me again, I will make sure I deal with him and he respected that for the next three years plus. However, early this year, he sent me another text, claiming that about N64 million passed through his accounts from the Academy, that he did money laundering with some other workers. I was enraged over how such money entered his account from the Academy and why was he sending such text message to me. So, I sent for him and demanded to know how such money passed through his account and who his collaborators were. He started begging, but I called the Registrar and told him that he should be given a query which was issued to him. That was November 2020.

“However, as usual, vested interests hijacked the N64 million story and wrote a petition that a staff of the Academy said N1.4 billion was deposited in his account on a particular date in October from the Academy.  And that he was forced to withdraw N1.3 billion. Is it possible to pay N1 billion into anybody’s account and escape the radar of the EFCC? It is not possible? You can’t deposit that kind of money; you can’t even deposit N30 million in a day.

“Now let me explain the N64 million that these saboteurs have been peddling to blackmail me.  The bursary department has desk officers for certain functions of the academy. For example, if this press briefing had been held at the academy, somebody who is a desk officer in the academy’s bursary department will have to apply for the money to be used to host the event. Money for flight tickets, accommodation, feeding and whatever the academy will need to host the event will be applied to by a staff of the bursary department. Such money must pass through the account of a staff of the Bursary department because we don’t have any business with commercial banks. Such money must go through the account of a staff who will be the coordinator for the event. However, this is rotated among the bursary staff. Somebody has to do that. You don’t expect outsiders who are not our staff to receive money from us directly. So that is what happened in the case of the N64 million allegation. This particular staff lobbied to be used as a desk officer for that period. He used that situation to have some inflows into his account for official duties, which have since been retired, which he admitted in his response to the query issued him in November 2020. He has since been dismissed from the Academy but is now making news stories from the monies that passed through his account for official purposes because he felt he must hit back at the system.”

In spite of the huge investment in the water sector by the government and international organisations, water scarcity has grown to become a perennial nightmare for residents of Abeokuta, the Ogun State capital. This report x-rays the lives and experiences of residents in getting clean, potable and affordable water amidst the surge of COVID-19 cases in the state.