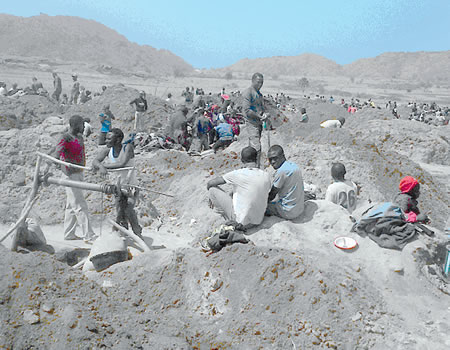 The chairman of Gwarzo Local Government Council, Alhaji Bashir Abdullahi Kutama, has raised the alarm over an influx of illegal miners from Zamfara State into his territory for mining activities.

This was just as the chairman who had earlier introduced profiling of migrants residing in the area, directed traditional leaders to constitute security watch groups in their respective communities.

Alhaji Kutama raised the alarm in a town hall meeting with representatives of security agencies, village heads, imams, transport unions and other stakeholders.

This was contained in a statement by the spokesperson of the local council, Rabiu Khalil, on Thursday, in Kano.

He disclosed that the meeting was to streamline modalities to improve and strengthen security of lives and properties in the area.

However, while speaking on the occasion, the district head of Gwarzo Shehu Kabiru Bayero (Barde Kerarriya) appealed to people to pray for peace and prosperity in Gwarzo Local Government, Kano and Nigeria.

In their separate remarks, the representatives of the Nigerian Police, DSS, National Security and Civil Defence Corps (NSCDC) and NDLEA applauded the commitment of the council chairman on security issues and urged people to report suspicious persons to the nearest security agents.

Last week was one of twists and turns for First Bank of Nigeria Limited, the nation’s oldest banking institution. It was a week that saw the bank’s MD sacked and reinstated, as major shareholders struggled for control of the financial powerhouse. SULAIMON OLANREWAJU reports…

A witness of the Lekki tollgate shooting incident, Miss Sarah Ibrahim has presented video evidence of people injured and killed at the scene to the Lagos State Judicial Panel. Tribune Online reports that…

Onitsha residents are currently in fear, as a truck fully loaded with cartons of live bullets fell into a ditch and spilled its content all around the street, in the commercial city of Anambra State…