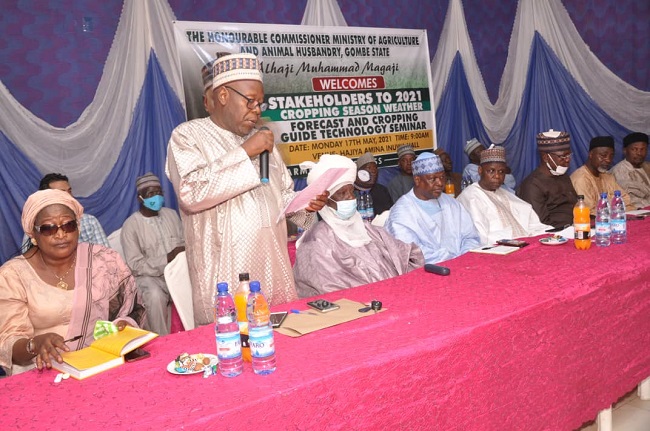 
Gombe state Commissioner of Agriculture and Animal Husbandry, Muhammad Gettado has decried the poor handling and disbursement of the N200 billion Federal Government Agricultural intervention fund, saying that most of those who benefited from the gesture are at best not genuine farmers.

The Commissioner equally blamed some farmers who are in the habit of selling out Agricultural intervention given to them by the Government describing such act as inimical to the growth and development of the Agricultural Sector in the State and the country at large.

He was speaking on Monday at a One-day Seminar organized by the Gombe State government on the weather forecast, cropping guide and modern farming techniques for farmers and other stakeholders in the State to equip them in the face of climate change and global warming as the 2021 farming season is coming gradually.

The seminar was conducted by the State Ministry of Agriculture and Animal Husbandry under the coordination of the Commissioner, Muhammad Magaji Gettado who told the participants that the sensitization was necessary for farmers to understand the crux of farming methodology before, during and after each cropping season in view of the fast-changing climatic condition.

He further said that the Gombe State Government through the Ministry of Agriculture and Animal Husbandry is poised to keeping farmers in the State abreast with modern farming techniques so as to guard against avoidable losses during and after each cropping season.

He also stressed the need for farmers in the State to understand what to cultivate, when to cultivate and where to cultivate a certain farm produce in view of meteorological reports indicating differentials of rainfall from place to place.

Muhammad Magaji said that the Ministry is currently in possession of a comprehensive list of genuine farmers in the State as a precursor to reaching them each time Government intervention or programme arises.

The Commissioner also disclosed that the seminar will be extended to senatorial districts in the State in order to have comprehensive coverage of all farmers and stakeholders in the Agricultural industry for maximum benefits and results.

While commending the state Governor, Muhammadu Inuwa Yahaya for his superlative performance in the Agricultural sector which stems from the timely distribution of fertiliser and other farm inputs, the Gombe State Commissioner of Agriculture and Animal Husbandry assured farmers in the State of the Gombe state’s willingness to partner with them in every step of the way.

She expressed confidence that the seminar will go a long way in guiding farmers on the crops to be planted in view of the weather forecast and cropping guide Technology.

Delivering a weather prediction report by Nigeria Metrological Agency (NIMET) on the breakdown of rainfalls in each of the Local Government Areas of the State and what farmers should practically do in their best interest, Dr Joseph Kaltungo a Director in the Ministry of Agriculture and Animal Husbandry said that farmers in Gombe South and Gombe Central will have no problem planting early, middle or late maturity varieties of crops while those in Gombe North will do well to cultivate extra early maturing varieties of crops.

The seminar which had in attendance the commissioners of works, lands and survey as well as Internal Security and Ethical Orientation also featured goodwill messages from the Director Federal Ministry of Agriculture in charge of Gombe State and the Senior District Head of Gombe, Alhaji Abdulkadir Abubakar.

How delay of PIB hurts Nigeria

I am still in the race with Soludo, others, Chukwuma Umeorji tells supporters