IT was an early morning French class at Sawonjo Junior and Senior High School, Yewa North Local Government Area of Ogun State on October 12, 2020. About 32 pupils aged between 12 and 13 yearsand seated on rows of rickety chairs in an open space listened with rapt attention as their teacher stood in front of a blackboard erected at the back of an abandoned classroom block to teach them the subject in the expansive school complex.

But beyond the serious mien of the pupils were tell-tale signs of dehumanising learning environment in the 40-year-old school. Founded and inaugurated with fanfare during the administration of the first civilian governor of the state, Chief Bisi Onabanjo, in the Second Republic, the school is grappling with the challenge of inadequate classrooms. Fallen roofs, collapsed ceilings and decrepit furniture all bear testimony to the attention the school desperately needs. It is a situation that has forced both the junior and senior students of the school to have their classes in the open for many months now.

The hapless pupils are subjected to the agony of learning under the scorching sun and in the rain. In one of the visits our correspondent made to the school, the poor pupils had to scamper into one of the dilapidated structures in the expansive compound as their learning session was halted by a downpour. The ceilings of the classrooms had fallen off while the walls cracked afterwards, sending dangerous signals to the school authorities, but nothing was done to fix the collapsed structures. 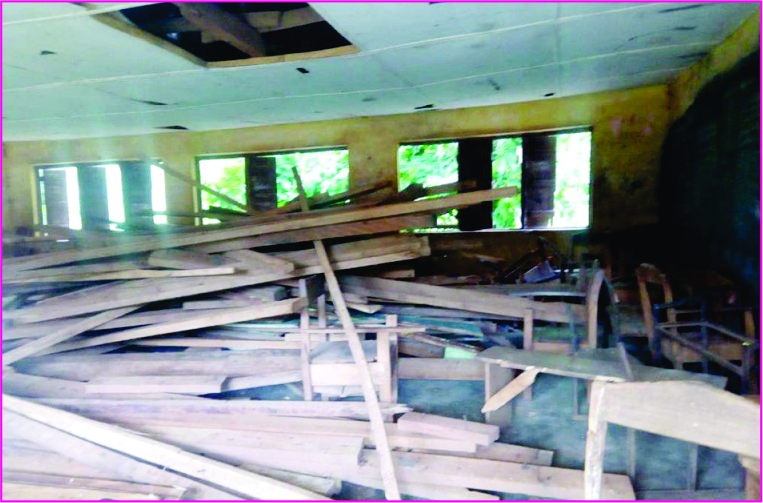 The deplorable conditions of two out of the three classroom blocks are simply beyond human imagination. The ceilings have caved in while the walls are so weak that the pupils had to be evacuated from them to learn in the open space for fear that the structures could collapse at any time and that could spell a disaster.

Our correspondent observed that only one of the three classroom blocks had its roof in fairly good condition, leaving other students whose classrooms’ roofs had fallen off to seek refuge in the dilapidated structure.

The walls are decorated with cracks while the rubble of damaged furniture and collapsed ceilings complete the sorry sight of the ‘door-less’ classroom block.

Sources said the infrastructural decay in the school began more than 12 years ago when the classrooms, furniture and toilet facilities became decrepit and nothing was done to fix them despite repeated promises made by the education authorities in the state after it was brought to their attention.

Immediately the downpour stopped, regrouped outside their classrooms to continue their lessons, wearing their face masks in strict compliance with the Covid-19 protocols and enduring the scorching sun that followed the rain. The teachers declined comments in spite of promptings from our correspondent as they cited civil service regulations which they said forbid them from talking to the media.

“The situation is beyond us. There is nothing we can do about it. Several letters have been written and forwarded to the state government with photographs of the terrible conditions of the classroom blocks in the school attached, but there has not been any fruitful response from the authorities,” a source in the school said, pleading anonymity.

One of the pupils, who spoke with The Nation in confidence, expressed concern about their safety, saying that learning in the open had exposed them to unfriendly environmental condition and dangerous reptiles, particularly snakes which sometimes slighter into the premises, especially on sunny days.

He said: “We have been in this terrible condition since our classrooms collapsed many months ago. We heard that the state government was informed but nothing has been done to fix the decrepit classroom blocks.

“We are learning with tears. We have been learning in terrible conditions such as heavy rains and sunshine. More importantly, snakes do come into the open space where we are forced to learn because of our collapsed classrooms.”

A female student who craved anonymity explained that some community leaders had shown concern about their plight. She said the situation had negatively affected their performance as students and the wellbeing of their teachers.

She said: “We can no longer concentrate because of the weather conditions. It could rain at any time while we are being taught in the open. Most times, we panic as the weather changes because our session would be halted until the rain subsides.

“The state authorities should help to rescue us from the hopeless situation that dilapidated structures and absence of good classrooms have foisted on us. On some days, prolonged rainfall would not even allow us to have any session with our teachers.

“The situation calls for urgent intervention to save our future and guarantee conducive academic environment.”

Last year, the state government said it had embarked on the rehabilitation of elementary and secondary schools in different parts of the state. Speaking during a one-day stakeholders’ forum, whose theme was ‘Repositioning Education for Outstanding Performance’ in Abeokuta, the state capital, Governor Dapo Abiodun promised that the rehabilitation exercise was being carried out in fulfillment of the promise made in his maiden speech as governor.

He said: “As you all know, during my inauguration on May 29, I declared an emergency in the education sector. We are following it up with the rehabilitation of 236 primary and secondary schools in each of our wards.

“We set up committees to resolve issues that affected smooth running of academic activities in some of our tertiary institutions. The committees have since submitted their reports and recommendations.

“I want to assure our good people that education, which is one of our pillars, will continue to receive due and prompt attention.”

It is obvious, however, that the gesture promised by the governor has not been extended to Sawonjo High School. 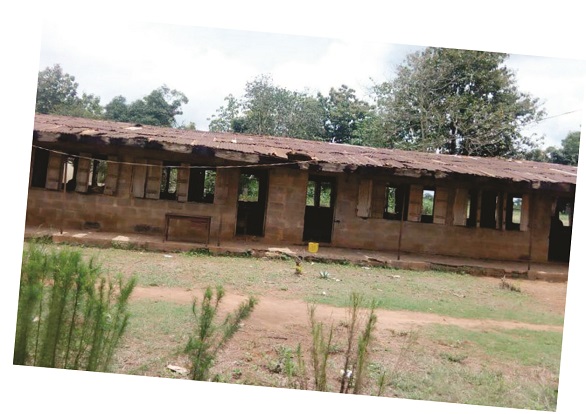 A cross section of parents and community leaders expressed their dissatisfaction at the turn of events in the school, which they claimed had been the pride of the ancient community.

One of them, who identified herself simply as Madam Tawakalitu, said: The conditions of the classrooms in the school are nothing to write home about. Our children can no longer take their lessons or learn in their classes because the buildings are shambolic now.

“As you can see for yourself, our children now sit in the open to take lectures from their teachers and this has exposed them to unfriendly environment as they are disturbed by exposure to intense sunlight and rains.

“Although some elders of this community have made frantic efforts to call the attention of government to the terrible situation in the school, nothing has been done to remedy the problems.”

Our correspondent gathered that residents have started contributing money towards carrying out relative repairs in the school while SUBEB (State Universal Education Board) has promised to fix one of the abandoned classroom blocks; a promise described by residents as unrealistic.

A leading member of the community, Elder Ademola, said: “As community leaders, we have tried as much as possible to intervene in a number of ways, but we have limited financial capability to give any face lift to the schools because we are peasants.

“The last time there was any government intervention in the school was about 12 years ago. Since then, no help has come from government to address the plight of the pupils who have since been sitting in the open to learn.

“We have lodged several complaints by way of letters to concerned authorities especially the State Universal Basic Education Board (SUBEB) all to no avail. They only promised to come to our aid but nothing has been done as we speak.”

One of the residents, Fayomi Abiodun James, expressed sadness that all appeals made by the community to the state government lately had yielded no result.

“We have made several appeals to the current administration in the state but it appears the authorities have turned deaf ears to our cries,” he said.

In a telephone conversation with The Nation, a leader in the community, who pleaded anonymity, expressed his displeasure at the conditions of infrastructure in the school, which according to him had affected its academic activities.

“It is disheartening to see the school in disrepair because a number of eminent indigenes of Sawonjo are products of the school.

“We have cried out to the education authorities but we haven’t heard from them with regard to their promise of fixing one of the classrooms in terrible conditions,” he said.

Responding to inquiries from our correspondent, the Chief Press Secretary to Governor Dapo Abiodun, Mr Kunle Somorin said efforts are being made by the state government to rehabilitate dilapidated infrastructure in public schools.

“Ogun remains the Education Capital of Nigeria. We do not micro-manage. All schools are being rehabilitated. The State Government under the leadership of His Excellency, Prince Dapo Abiodun, had declared an emergency in that sector and it is on record that we had released of 2014-2017 UBE Matching grant to the tune of Ten Billion Naira which translates into 952 Education Projects. These Projects have two special features including a Yellow roof and terrazzo floor. Under the implementation protocols, each of the 236 wards in Ogun State would get at least one project.’’

He added that Sawonjo High School could benefit from the next phase of the ongoing rehabilitation projects in various parts of the state.

‘’The State had successfully constructed and rehabilitated a total number of 94 blocks of Classrooms for Public Primary and Junior Secondary Schools across the three senatorial districts in the State in the first year of this Administration. I’m sure in the coming phase; Sanwonjo High School might just be a beneficiary. It is an on-going contract with the people and we are determined not to let the people down.’’

226 Varsities, Others To Benefit From TETFund’s N500bn Education Tax In...