Home LINDAIKEJI Prison inmate who escaped during the jailbreak in Imo is set ablaze...
Do You Need Accurate Daily Football Prediction and Tips? – Click Here 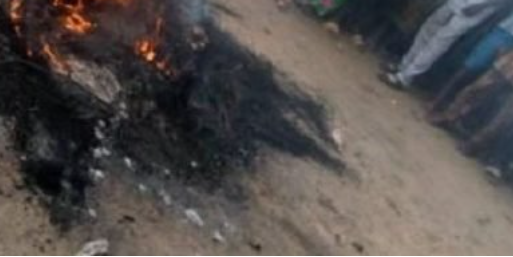 One of the prison inmates who fled from the Imo state correctional center has been set ablaze by angry residents of Umuawom village, Ihodimeze community in Ikeduru council area of the state.

Recall that on Monday, April 5, hoodlums attacked the correctional facility and set over 1.800 inmates free.

One of the freed inmates was incarcerated for kidnapping. An indigene of Ogwa community in Mbaitoli LGA of Imo State but grew up in Umuawom village which is his maternal home, the fleeing inmate was said to have gone to Umuawom to challenge one of the families that testified against him in court and threatened to deal with them. He reportedly tried to use a gun to carry out his threat.

The villagers immediately pounced on him and after beating him to a pulp, they set his body on fire.

The state police command is yet to comment on this development.