Home LINDAIKEJI #EndSARS protester accuses police of brutalizing her during the peaceful protest in...
Do You Need Accurate Daily Football Prediction and Tips? – Click Here 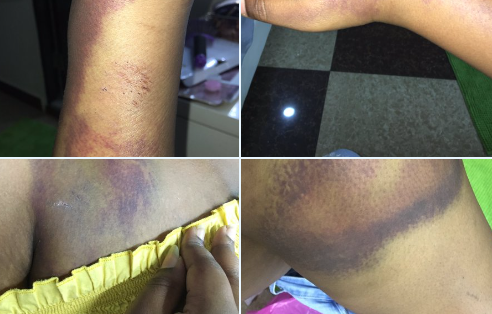 A Twitter user has accused men of the Nigerian police force of brutalizing her while participating in the peaceful #EndSARS protest in Abuja last Sunday. Sharing photos of injuries on her body, she wrote

We had walked towards them and knelt down in front of them. Before we went we made a plan to put our phones down so they don’t feel attacked. We locked hands together and knelt/sat in front of them. We had been there all of 2 minutes when teargas flew in from multiple directions

Everyone ran.. I was at the forefront of the protest so I had to run through the teargas and some got into my eye. I hid behind a wall to wash my face so I could see properly before I continued running. When I heard some men yelling at me in the distance

“What are you doing here” they said.. the closer they got I had a feeling something horrible was about to happen to me. “Where’s her phone” “take her phone” they said. They took it (till today I don’t know where my phone is) Nigerian police officers took my phone.

7 policemen beat me with a baseball bat and thick tree branches. They beat me like I was a criminal while a female police woman stood by.. they asked me what I was doing protesting.. let it sink in that they beat me because I had the audacity to protest.They asked me who payed me

They rained curses on me in hausa and threatened to shoot me and throw me into a nearby bush.. to be very honest I thought I was going to die.. they proceeded to try to drag my clothes of my my body in the process ripping my clothes and slacking it. I begged them not to..

They took my wig and snatched my cross bag off my body ripping the bag in the process. Their leader proceeded to tell them to stomp on everything in my bag and destroy everything.. Nothing in my bag was left undestroyed.. my atm card,power bank.. etc

This was an attempt to silence me and scare me.. they put me in a VIO pickup and threatened to take me and some other girls they had rounded up to their “office”. IDK what made them change their minds but they told us to get out and run while beating us like animals

We were lucky to see a taxi man nearby.. he carried us all.. and dropped us at our respective destinations

Please everyone should trend the hashtags.. do not let the damage they have done to my fine skin go to waste.. I am a coconut head too so don’t worry about me but please keep fighting. Keep protesting! Keep blocking everywhere. I am very proud of all of us! They never jam crace!

FUN FACT: this happened 2 hours after they released the circular saying SARS had been disbanded!!”