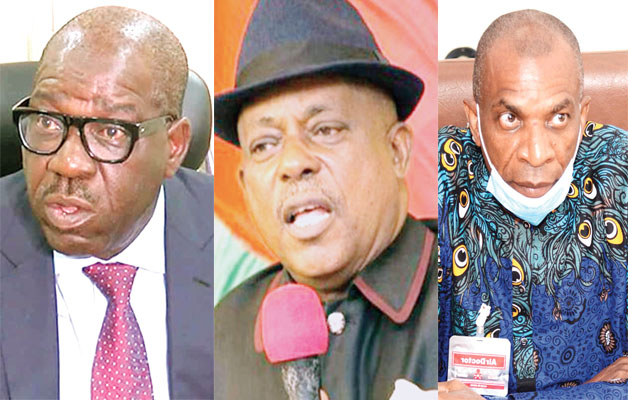 LAGOS  – Nine months after dumping the All Progressives Congress (APC) and adopting the Peoples Democratic Party (PDP) as his new abode on whose platform he won reelection, Governor Godwin Obaseki and his new landlord are at daggers drawn over the control of the soul of the party.

The governor who joined the PDP with thousands of supporters is calling for the dissolution of the excos from ward to the state level and also calling for a fresh election, a move that didn’t resonate well with Anthony Aziegbemi, the Edo state PDP chairman and his executives.

The lid was blown open when the State Working Committee (SWC) wrote a letter to Prince Uche Secondus, the national chairman of the party in which it accused Obaseki of plotting to dissolve the validly-elected ward, local government and state executives.

The SWC, in a May 10 letter signed by the chairman Dr Tony Aziegbemi and Secretary Hillary Otsu also called for the resignation of Deputy Governor Philip Shaibu as part of the power-sharing arrangement.

In the letter, the SWC said the genesis of the “looming crisis” was the “acquiescence” of the National Working Committee (NWC) members, who negotiated Obaseki’s movement to PDP and agreed on the integration of the new members and the sharing of appointments after the election.

They also said the proposed dissolution and harmonisation being canvassed by Obaseki were designed to hold Edo people and the PDP to ransom.

The SWC stated: “At an emergency meeting, the State Chairman, Dr Tony Aziegbemi, briefed the SWC and LGA party chairmen on Obaseki’s May 8, 2021 meeting at the Government House, Benin, with the agenda to propose dissolution of Edo State executive committees at all levels.

“After more than five hours of deliberations, the following resolutions were adopted: the expanded SWC and local government chairmen of the Edo State PDP reject in its entirety the proposal to dissolve the legitimately-elected executive committee members of the PDP at the ward, local government and state levels.

We also condemn totally the convening of the meeting aimed at ambushing Edo State Chairman of PDP (who is constitutionally empowered to call such a meeting) which only three old PDP members (Dokpesi, Ikimi and Oghiadomhe attended), as against ten members from the Obaseki faction that defected from the APC to PDP.

“We hereby reiterate to the National Executive Committee (NEC) of our party that the issue of dissolution of executive committees in Edo State is ‘sub-judice’ and it will be an act of contempt of court to revisit it by the party.”

Credible sources however said the crisis is centred on moves by Governor Obaseki to ensure his own men who followed him from APC to PDP takes charge of the party affairs.

According to these sources, Obaseki who is not comfortable with the present PDP leadership in the state is desirous of having Anselm Ojezua, former APC chairman in Edo as the new PDP chairman in the state.

Ojezua, a fiercely loyal supporter of Obaseki defected from the APC to PDP in December 2020 with over 150,000 members. He cited loss of confidence in APC national leadership and alleged disobedience to the party’s constitution as his reasons for leaving.

Speaking with our correspondent yesterday, one of the leaders who spoke on condition of anonymity said Obaseki who is now the leader of PDP in Edo state by virtue of his position wants his men to be in charge of the party affairs.

“ Yes, the governor wrote to the PDP National leadership asking for a dissolution of the current executive and a fresh election to be conducted. The reason he gave was that there were too many factions in the party”.

“But the truth is that the current PDP leadership led by Aziegbemi knows that if a fresh election is to be conducted today, they stand no chance of returning because whomever is the candidate of the governor will win. From feelers we are getting, Governor Obaseki wants Anselm Ojezua who stood by him through thick and thin in APC and has even joined him in PDP as the new chairman of the party (PDP) in Edo state”.

“From the look of things, the governor is gaining the upper hand, because key leaders of the PDP in Edo such as Chief Tom Ikimi, Mike Oghiadomhe and Charles Idahosa are on the same page with him” our source said.

Efforts to confirm the development from Governor Obaseki proved abortive as our correspondent gathered that he is yet to appoint a media aide since his reelection.

Also a message sent to him was not replied to as at the time of going to press.

However, speaking with our correspondent, Chief Charles Idahosa confirmed that the PDP faction loyal to Governor Obaseki has written to the national body of the PDP to dissolve the current exco and conduct a fresh election in order to allow for harmonization of the various factions. He said Aziegbemi and other members of the exco are free to contest again if they so desire.

Giving reasons for their decision, Idahosa said all the APC members who joined the PDP with Governor Obaseki, including himself were shut out by the PDP members.

He said “Since we joined PDP, we have been having problems. All the people that came with us from APC are not holding any position. They said they already constituted their exco, but what about our people that came? In other words, I Charles Idahosa cannot produce a councillor in my ward. The governor from Ward 4 in Oredo cannot produce a councilor because the delegates that will choose councillorship candidates are all PDP”.

“No person that came with Obaseki from APC to PDP can have any political ambition to be anything. That is why we are saying let’s harmonise. Funny enough, this thing has a precedent”.

“Obaseki is not the first governor to leave APC for PDP. When Aminu Tambuwal left APC for PDP in Sokoto, they said you are the governor, you are bringing us power. The PDP gave him 60-40 sharing formula. That is 60 percent of the executives from the ward and they will take 40 percent”.

“All these people came with Obaseki from APC to PDP. But Obaseki said we should carry everybody along and we said okay. At the end of the day, they are still refusing to let our people in and they keep saying we will bridge the gap”.

“We on our part said, let’s harmonise. If it is 60-40, 70-30 or 55-45 sharing formula, let’s agree. You can see the lame excuse they are giving. They are talking about SSG. Yet, this same people will come to Government House and say we are not interested in SSG, Chief of Staff positions because they are personal to you”.

“Now the governor said I want to form a cabinet, how do I do it? Chief Ikimi now said, if we say 60-40 sharing formula, if the governor takes his 60 percent, how are we going to share the 40 percent, because we have factions?”

“In my local government, the PDP has three factions. One single person will just handpick all the party executives and the rest will be looking. So, we said enough is enough! We are going to write to the national leadership because the governor of the state by the PDP constitution is the leader of the part”.

Obaseki later met with State Working Committee (SWC) in Government House last Wednesday where he expressed his unhappiness over the position of the SWC which he said was “too hard” on him.

He was said to have appealed to them that contrary to insinuation, he is not taking them for granted and that he remained grateful to the PDP for giving him the platform for his re-election after falling out with his former party, the APC.

He also informed them that he has been receiving calls from his colleague governors across the country and business associates who were expressing their concern that he was falling out with the party that brought him back to power so soon. At the end of the meeting, he was said to have demanded a withdrawal of the letter written to the national body and demanded an apology from the Aziegbemi-led SWC.

All eyes are currently on the Secondus-led NWC on how the current impasse in Edo PDP will be resolved. However, the party members fear the APC may be the greatest beneficiary if the matter is not amicably resolved.