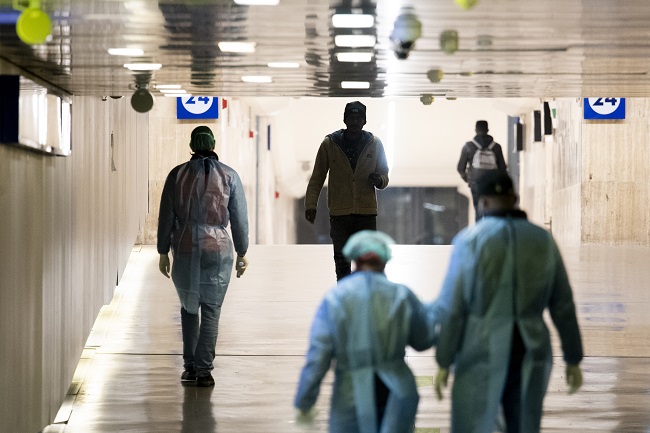 Italy’s government on Thursday approved a 40-billion-euro support package for its struggling economy, including 100 million for ailing flag carrier Alitalia.

The eurozone’s third largest economy has been devastated by the coronavirus pandemic, although Prime Minister Mario Draghi expects growth to improve this year as more people receive vaccines and business activity picks up.

The support package, worth around $49 billion, includes 26 billion euros for businesses and self-employed workers who have been hammered by the worst recession since World War II.

The equally battered tourism sector is to get more than three billion euros in aid.

Alitalia, which has been under state-controlled administration since 2017 and is still struggling to pay wages, won yet another cash injection “for operational and management continuity”, according to a draft government decree seen by AFP.

The airline’s future depends on EU approval of a bigger bailout worth three billion euros that would create a new debt-free company to take over some of Alitalia’s assets.

“I think we will shortly find a solution to allow the launch of this company,” Economy Minister Daniele Franco said, before adding that he did not expect Alitalia to change its name, as initially demanded by Brussels.

After expressing concern last week for a record drop in Italy’s birthrate, Draghi also announced mortgage subsidies for people aged under 36 to help them buy a home and start a family.

Carlo Bonomi, president of the employers’ association Confindustria, called the measures adopted Thursday “important”, but said more was needed to get Italy’s economy back on track.

Draghi said “growth figures for this year will probably be revised upwards,” but stressed that a stronger recovery hinged on the success of Italy’s EU-funded 221.1-billion-euro recovery plan.

Since the coronavirus swept across Italy in February 2020, the government has allocated more than 130 billion euros to economic sectors shut down during the country’s lockdown periods.

As a result, public finances have taken a massive hit.

The government’s deficit is expected to balloon to 11.8 percent of GDP this year, compared with just 2.4 percent in 2019.

Public debt should hit 159.8 percent of GDP, the second-highest ratio in the eurozone behind Greece.